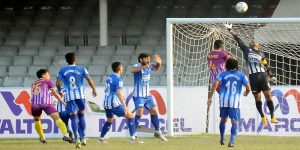 Chittagong Abahani confirmed the last four following a 2-0 win against Sheikh Russel Krira Chakra in the extra time of the quarterfinals in the ongoing Walton Federation Cup football after the match saw a goalless draw in the regular time on Friday.

It was also a rivalry between the two famed coaches of the country AKM Saiful Bari Titu and AKM Maruful Haque where Chittagong Abahani coach Maruf had the smile on his face at the end.

Chittagong boys could go ahead in the 64th minute when their substitute midfielder Kawsar Ali Rabbi took a 25-yard long cross but the fans were disheartened to see the ball flew a little over the crosspiece.

Sheikh Russel missed the best shot in opening the net in the 67th minute. They were awarded a penalty shot after the opponent downed their striker in the 18-yard box. Unfortunate matter for them that Brazilian striker Giancarlo Lopes Rodrigues took the shot and sent it right into Chittagong Abahani custodian’s grip.

The match rolled for a 30-minute extra time after the regular time finishing goalless.

In the extra time, Chittagong Abahani mounted pressure on the opponent and succeeded in breaking the deadlock. Their midfielder Rakib Hossain fired the post in 107th minute.

They doubled the margin in the 113th minute when Mannaf Rabby utilised a cross of Cote d’Ivoire midfielder and skipper Kephi Jean Charles Didier to hit the net.

Now Group-B champion Saif Sporting Club and Group-D runner-up Dhaka Mohammedan are meeting in the second match of quarterfinals on Saturday at 4:00 PM at the same venue.