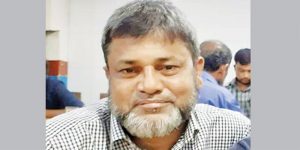 Former national team footballer Shafinur Rahman Samrat died on Thursday after losing his battle against COVID-19 at a city hospital.

He was 58. He left behind his wife, two daughters and hosts of well-wishers to mourn his death.

He was buried to rest at his family graveyard in Bagura after a namaz-e-janaza following Asr prayers.