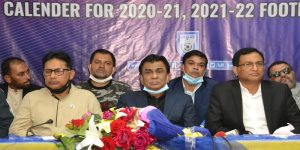 Bangladesh Football Federation (BFF) disclosed calendars and plans for two years, 2020-21 and 2021-22 and discussed BFF activities in the year 2020 in a media briefing on Thursday at the BFF House, Motijheel.

BFF president Kazi Salahuddin said, “The departing year 2020 did not go well for anyone. I hope the year 2021 will be a good one.”
The BFF officials attending the briefing said about different of their big plans in the coming days.

One of the vice presidents of the federation and Chairman of Toma Group M Ataur Rahman Bhuiyan Manik said, “We have taken initiative to set up BFF offices at eight divisions and from those divisional offices we will run talent hunt programmes. Our appointed coaches will hunt down talents and will begin grassroots campaigns.”

He added, “We hope to get the BFF Gymnasium by the March next year.”
BFF General Secretary Abu Nayeem Shohag, “First, Second and Third Divisions leagues will be held from March to July each year.”

“The District Football League in the districts will be played in the first three months each year.”

After 17th February, there is a gap of more than 40 days before 20th April. Mr Abu Nayeem said, “We have a 40 days gap in March-April and we are going to arrange Bangabandhu Gold Cup in the first two weeks of March. Besides there is a nine days FIFA window from 22nd to 30th March and we want to play International Friendly matches.”

Salahuddin added, “We will try our best to do better in the coming days and we will need supports from everyone.”

He said that they would need financial source and supports to succeed these events and calendars. He added, “We will submit our demands to the ministry and organisations soon.”
The president also said that they would utilise the two FIFA windows playing International Friendly matches.

BFF senior vice president Abdus Salam Murshedy assured that they would try to stick to their plans and do well.

The BFF General Secretary later disclosed that the draft of calendars was Okayed in a meeting of the BFF Executive Committee on the 24th December.