Norwich slip up again while Rooney leads Derby towards safety 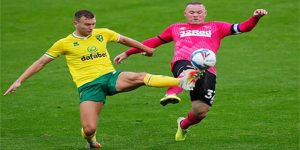 Championship leaders Norwich dropped points for the second time in four days as they were held 1-1 by struggling
QPR while Wayne Rooney’s Derby climbed out of the relegation zone by thrashing Birmingham 4-0 on Tuesday.

After losing 1-0 at Watford on Saturday, Norwich slipped up again as the visitors recorded a hard-earned point in a game of two penalties.

The Canaries were dominant throughout and looked as though they had won it when Teemu Pukki scored his 11th goal of the season from the spot with 15 minutes remaining, but were pegged back nine minutes later as Bright Osayi- Samuel followed suit for the visitors.

Swansea and Bournemouth have the chance to close the gap on Daniel Farke’s men on Wednesday.

At the other end of the table, Derby recorded their biggest win of the season to climb out of the bottom three for the first time since the end of October.

Three goals in 10 first-half minutes from Krystian Bielik, Graeme Shinnie and Colin Kazim-Richards, did the damage for Rooney’s side before Jason Knight completed the scoring.

The Rams have lost just once in eight games to bolster the former England and Manchester United captain’s chances of turning his stint in temporary charge into a permanent appointment.

Pulis left the club on Monday night having been in charge for just 45 days and 10 games.

First-half goals from Callum Paterson and Liam Shaw secured victory at Hillsborough, with the hosts holding on after Duncan Watmore pulled one back.

Stoke moved to within a point of the playoff places with a 1-1 draw with Nottingham Forest as James Chester’s own goal cost Michael O’Neill’s men victory.

Huddersfield made it five home wins in a row as Naby Sarr’s double earned a 2-1 victory over Blackburn.

Preston beat Coventry 2-0 to move within four points of the playoffs thanks to goals from Daniel Johnson and Sean Maguire.

At the bottom of the table, Wycombe earned just their third win of the season as headers from Ryan Tafazolli and David Wheeler beat Cardiff 2-1.

Luton and Barnsley were 2-1 victors over Bristol City and Rotherham respectively. AFP