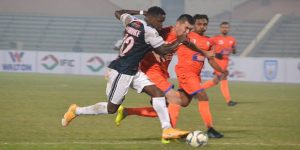 With the day’s win, Saif SC secured six points from their two consecutive wins in the group matches following their 3-0 win over Uttar Baridhara Club in the group opening match.

On the other hand, Brothers Union Club almost out from the championship race following their two consecutive defeats in a row in their group phase matches. The Gopibagh outfit earlier lost to Arambagh Krira Sangha by 0-2 goals in their opening group match.

In the day’s match, Lkechukwu scored a brace in the 20th and 64th minutes while Yasin, Arifur Rahman, Miraz and Sazzad supported him with a lone goal in the 36th, 49th, 77th and 80th minutes respectively for Saif Sporting Club.

Foreign recruit Siyo scored the consolation goal for Brothers Union Club in the 90+3rd minute from a penalty.

Saif Sporting Club will play their next group match against Arambagh Krira Sangha while Brothers Union Club meets Uttar Baridhara Club. Both the matches will be held on December 29 at the same venue.