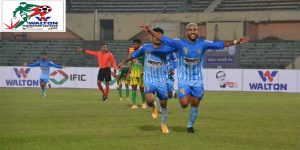 In the day’s match, Brazilian forward Nixon Guylheme scored the all-important goal for Abahani in the 37th minute of the match.

After the resumption, Rahmatganj tried hard to stage a fight back in the match but failed to convert those due to lack of proper finishing.

Chattogram Abahani Limited will play their second and group last match against holders Bashundhara Kings on December 28 at the same venue.