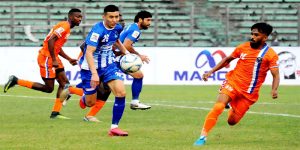 The treble winner of 2012 season Sheikh Russel Krira Chakra Ltd had started the new season winning over Bangladesh Police Football Club by a single goal in the Federation Cup football on Thursday at Bangabandhu National Stadium.

The blue jerseys managed to win the match although they failed to satisfy their fans. The big budget team certainly failed to play up to mark on the day. Their Brazilian recruit Lopes Rodrigues was seen failing to receive easy passes while there was a lack of team spirit. Tajikistan Defender Siyovush scored the match winning goal for them and seemingly it was the only good action from the winning side in the match. The fans hope that a big team like Sheikh Russel will do better in the coming days.

The Russel boys managed to open the net in the 50th minute after which the Police boys tightened their grips and succeeded to prevent their opponent from scoring any more.

Police team’s Lankan head coach Pakir Ali who was once a famous player of Dhaka Abahani said before starting the season that his team would challenge the big powers in the matches. In fact his disciples did well in holding the opponent for the first half. But without scoring there was no way they could level the margin or go ahead.

Now, Chittagong Abahani will take on Old Dhaka club Rahmatganj Muslim Friends Society in a Group-C match on Friday at 6:00 pm at the Bangabandhu National Stadium in Dhaka. Rahmatganj had already played their first match of the event on Tuesday against Bashundhara Kings and was defeated by 3-0 margin. On the other hand, Chattogram boys are going to start their season with the Friday match.