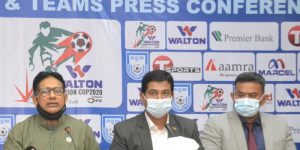 The new season of local football is beginning with Bashundhara Kings and Rahmatganj Muslim Friends Society engaging in the opener of the 32nd edition of Federation Cup football on Tuesday at 5:30pm at Bangabandhu National Stadium, Dhaka.

The two rivals were the finalists of the last edition of Federation Cup where Bashundhara Kings clinched the title beating Rahmatganj by 2-1 in the final.

Bashundhara Kings is one of the strongest and well-funded teams of the league. Before beginning the season, the champion of the Bangladesh Premier League 2018-19 expressed their high hopes in the coming season as well. Rahmatganj, on the other hand, was the 10th ranked team in the last played league.

Their Spanish coach Óscar Bruzón said on Monday, “Federation Cup is the first event of the season and we had 17 weeks of preparation for the event. We have high expectations for it.”

The coach indicated that winning the champion trophy is their target. His players were actually preparing for the AFC Cup which was postponed later on and the boys continued preparation and that way they had long-term preparation ahead of the new season.

Old Dhaka club Rahmatganj’s Coach Syed Golam Jilani said, “We had one month’s training for the event. Though we registered three foreign players they are yet to come in Bangladesh due to Coronavirus. We are still hoping to do well in absence of those foreigners.”