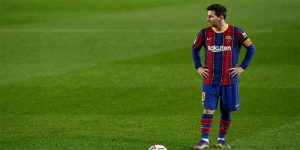 Pele has paid tribute to Lionel Messi after the Barcelona forward equaled the Brazilian legend’s record for the most goals with a single club.

Messi drew level with Pele’s tally of 643 goals for Santos with a lunging header on the stroke of halftime in Barcelona’s 2-2 home draw with Valencia in La Liga on Saturday.

“When your heart overflows with love, it is difficult to change your path,” Pele said in an Instagram post. “Like you, I know what it’s like to love wearing the same shirt every day. Like you, I know that there is nothing better than the place we feel at home.

While Messi achieved the feat in 748 matches, Pele needed only 665 games to reach the figure.

Pele, the only player to have won the World Cup three times, holds the Guinness world record for most goals in a career with 1,283, including friendlies.

Messi, 33, has scored 71 times in 142 appearances for Argentina and is also his country’s most prolific scorer.UNB