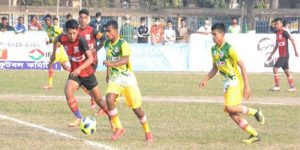 Chagalnaiya Pilot High School, Feni played out to a 1-1 goal draw with Suti V.M Pilot Govt. High School, Tangail in the lone opening final round match of the National School Football tournament that has begun from today at Outer stadium at Palton in the city.

Shariful Islam of Feni was named the player of the match for his impressive performance in the match.

Bangladesh Football Federation (BFF) senior vice president Abdus Salam Murshedy MP was present as the chief guest in the opening ceremony of the final round.

A total of eight school teams, split into two groups, are taking part in the final round. The top two teams from each group will qualify for the semifinals and the two top teams will play the final to be held later stage.

Earlier, fifty seven schools from fifty seven districts from across the country took part in the preliminary round of the competition