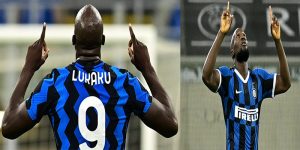 Inter forward Romelu Lukaku has claimed he’s ‘one of the top five strikers in the world’ and said the Nerazzurri ‘must fight to win the Scudetto’.

“I’m one of the top five strikers in the world,” Lukaku told France Football. “I can’t do anything wrong from a tactical point of view or even the movements. If Cristiano Ronaldo, [Lionel] Messi or [Robert] Lewandowski have exceeded their limits, why can’t I do it too?”

“He scored more than 100 goals for the national team, it’s a bit early to make comparisons,” Lukaku added. “In Milan everyone was talking to me about Ronaldo’s 34 goals in his first season. I’m glad I matched it, yes. But he won the UEFA Cup, and I lost the final. Now, I work to win trophies.”