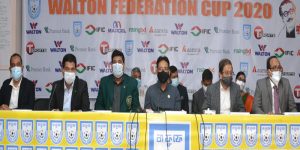 To be the title sponsor of the Federation Cup Football ‘2020, Walton Group has signed a contract with the Bangladesh Football Federation (BFF) at a signing ceremony at the conference room of BFF on Nov 8.

BFF Senior Vice President and chairman of the Professional League Management Committee Abdus Salam Murshedy MP and Executive Director of the meet’s title sponsor Walton Group FM Iqbal Bin Anwar Dawn singed the deal on half of their respective organizations at the function.

The representatives of two banks also signed the deal with BFF at the day’s signing ceremony.

Thirteen premier division club teams are scheduled to participate in the tournament. But, Muktijoddha SKC reluctant to participate this time showing financial crisis.

A limited number of spectators will be allowed to witness the match at the stadium following the health guidelines.